Koji vs the Mighty Boar! 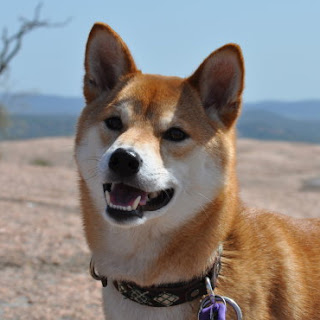 Or, how Koji cracked his tooth.

Yesterday was Koji's yearly checkup, and all went very well, doctor said he was perfect, gave him his three year vaccinations that were due and aside from being really nervous, he did very well.

Then I pointed out that I noticed he had a broken tooth about two weeks ago (but I had already made an appointment so it could wait.) The vet looked at it, checked the other side, which was fine, then went back to it and wiggled it. In pieces.

Way to go, bubs. You cracked your tooth and it now has to come out soon. I hope you'll be turning tricks in order to pay for this, mister.

As to how he cracked his tooth? We were thinking it over, trying to figure it out. He doesn't pick up rocks, his antler and nylabone he doesn't even touch, and the hardest treat he eats are bully sticks, which is easy enough to cut with a serrated knife (I've done it before to fit in the jar). While putting on his new rabies tag, my mom joked about his tags, and that's when it hit me. Koji used to chew on his tags all the time, and I'd make him spit them right back out. In that picture, you will notice a purple tag silencer, which he chewed right off. Once that was gone, he'd continue to chew on them, on his left side. I haven't realized it until now, but he hasn't been chewing his tags anymore. Probably because numbnuts cracked his tooth.

Way to go, dog. That's why I said don't chew on your tags.
Email ThisBlogThis!Share to TwitterShare to FacebookShare to Pinterest

Was it one of the back molar type teeth? My friend's Cairn cracked a premolar on her antler. Super pricey fix :(

It sure was. :( The only dogs that play with the antler are Jiro and Yuki when they are over, sometimes Sushi. Koji doesn't care for it since the day I brought it home.

Yeah, we're looking between a $3-400 fix. :( :( :( Asking our rescue vet to compare their quote to my vet's quote to see who I can possibly go with for cheaper. I can afford both, but I'd rather not pay for it at all, you know?

I still sayz he cracked that tooth on the tusk of the wild boar he brought down. I hear they roam central park.

LOL numnuts is a funny nickname

First time Shiba owners and recently married 20-somethings and the adventures they have in training, playing, and rescue.